Here are the first informations about our TRINITY loudspeaker for the “Golden Reference Edition”.

This loudspeaker is based on a RAAL tweeter, 18 full customized Ceramic Titanium midrange chassis and 9 carbon membrane bass chassis. 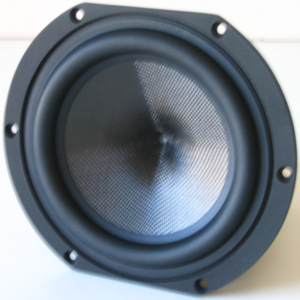 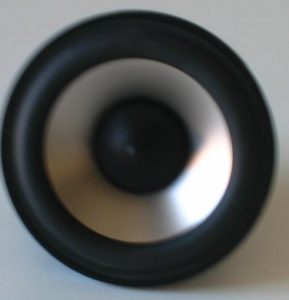 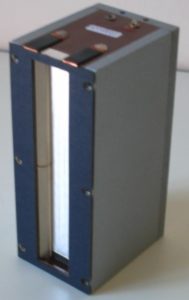 The half-moon shaped front is a carbon part.

The ceramic chassis are “floating” mounted, which means they have no stiff contact neither to the front nor to the back to avoid that the chassis set the enclosures parts in vibration.

There is always vibration damping material between the chassis and the enclosure (sorbotane or natural rubber). These chassis would stay in the same half-moon shaped position even without the carbon front. 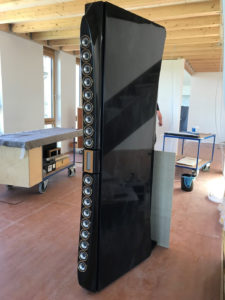 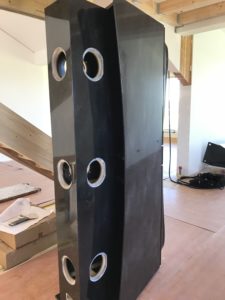 The nine 7.5” carbon membrane bass chassis have a bigger surface than two 15” chassis.

The above pictures show that we have almost finalized the enclosure of our 3-Way Loudspeaker.

The next major step is to design the cross-over, but how do we design a state of the art crossover?

To find the best available cross-over design technology I participated in a highly interesting 3 day seminar at the TU Berlin.

This seminar covers the theoretical and the practical design of passive and digital crossover filters and in addition the configuration and calibration of recording rooms.

On the software site we will use LEAP and Filter Shop from Linear-X and on the hardware site we have the APx 555 with the APx-SW-SPK-RD-Kit (Electro-Acoustic software options) and the APx1701.

The measurement microphones are 1/2″ MM210 plus MK250 and MV210 from www.microtechgefell.de

For the characterisation of the passive components we use our BK 894 LCR meter.

This meter has a basic accuracy of 0.05% and it covers a frequency range up to 500 kHz.

In general we think in both directions a pure passive design as well as a pure active design or anything between.

Some notes about the Passive Crossover Design 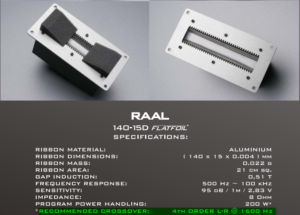 The manufacturer recommends a 4th order LR high-pass filter with a cut-off frequency around 1.6kHz.

The next picture shows recommended circuit of the cross-over filter. 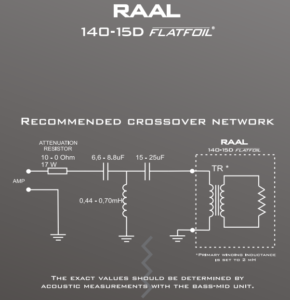 On the first view it looks like a 3rd order filter with the two caps and the grounded coil, but it seem we have to consider the 2mH inductance of the internal transformer as the second coil.

If the 2nd inductance is fixed to 2mH we have to calculating the matching cross-over frequency of the LR filter for this value.

The exact values of the LR high pass filter with 8Ohm impedance can be calculated easily and the calculation shows that for a cut-off frequency of 1.8 kHz a 2mH coil would match as the second coil and the resulting first coil is calculated with 440uH. 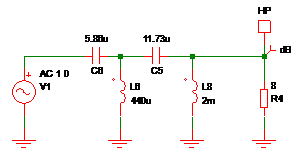 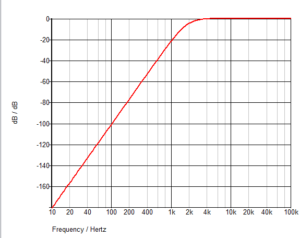 In the literature the LR filter is also called a quadratic Butterworth filter, which means the above described 4th order LR should looks like two 2nd order Butterworth filter in series. For this calculation I used a “regular” filter program, which allows the design of customized filter in the following way.

We see the LR can really be called a quadratic Butterworth filter.

The calculated values are exact the same, which we got from the crossover calculation software.

The next step is to choose the filter components. The behaviour of capacitors is well known and well described and the caps with the lowest losses are Metallized Polypropylene Film Capacitors. No brainer.

The open issue is the 440uH coil. Target was to design an almost ideal coil for an audio bandwidth up to 100 kHz, which means the self-resonance frequency should be well above 100 kHz or in other words the inductance should not change over the frequency. Some words about the self-resonance frequency (SRF). The following graph of a LCR meter shows inductance value of a coil over the frequency.  As we can see we have in this case a SRF of 1.8MHz and we see also above the SRF the inductance is zero!!! Therefore we have to know the SRF to be sure that the coil works as a coil in the application and not only as a resistor.

The following picture shows the results of the first 440uH coil, where we used high-frequency litz wires to keep the AC resistance constant over the audio band.

Even if the manufacturer claims only an accuracy of +/-15% in the production process, they are able to wind coils to the exact value on demand. This coil can handle up to 10Arms and the measured AC Resistance is constant 160mOhm almost up to 100 kHz. This accuracy is unique.

The second coil was designed for higher current up to 50Arms to keep the resistance even lower.

In this case we have to use two coils in series, therefore the design is based on two 220uH coils.

This design uses a flat wire and a special winding scheme to keep the inter-winding capacitance very low, the drawback in this design is, that it is almost impossible to get the exact inductance value, but the DC resistance is with 10mOhm extreme low and also constant over the audio band.

I just want to mention the low skin effect of flat wires was already described in publication like this: 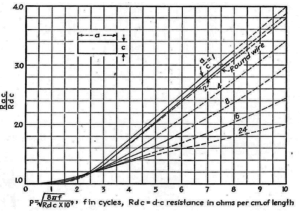 It shows, the use of flat wire is not new, but well known since decades. Just in the last years it was “discovered” by the audio marketing and became a hype.

By the way for the low-pass filter for the bass tower I had something really special in mind. A huge air-coil in a special mechanical format, whereby there is almost no limit in the design even coils with 170kg Copper would be possible!!!!

This special mechanical design allows bigger gaps between the windings to reduce the inter-winding capacity.

We designed and calculated a smaller one with “only” 8kg copper for 50Arms currents, 4mH and a DC resistance of 230mOhm. 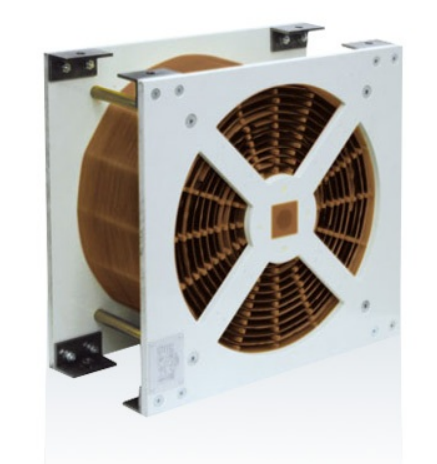 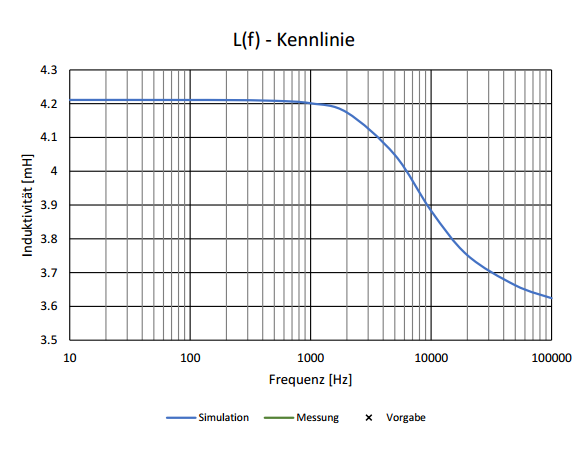 Simulated inductance over the frequency

At the end of the day I stopped the project since the cost around 1000Euro per coil were just too high. Nevertheless it is a very interesting solution from the engineering point of view.

Some notes about an Active Crossover Design

Active LR filters are well described in the literature. The following picture compares an active filter with a passive filter and as no surprise the frequency responses are identical.

By the way the green curve is covered by the blue.

In the above active design we see the four 100nF filter capacitors, which are placed in the signal path as usually.

Since all TRINITY audio devices are DC coupled the question comes up, is there a way to design a DC coupled 4th order LR high pass filter, to avoid any capacitor in the signal path.

The answer is of course yes.

There are different ways possible. I decided to implement a topology, which matches to my fully balanced TRINITY Gain Stage.

For the simulation I have designed a hierarchical block, whereby each block contains a 2nd order DC coupled LR high-pass filter with a cut-off frequency of 1.8 kHz. 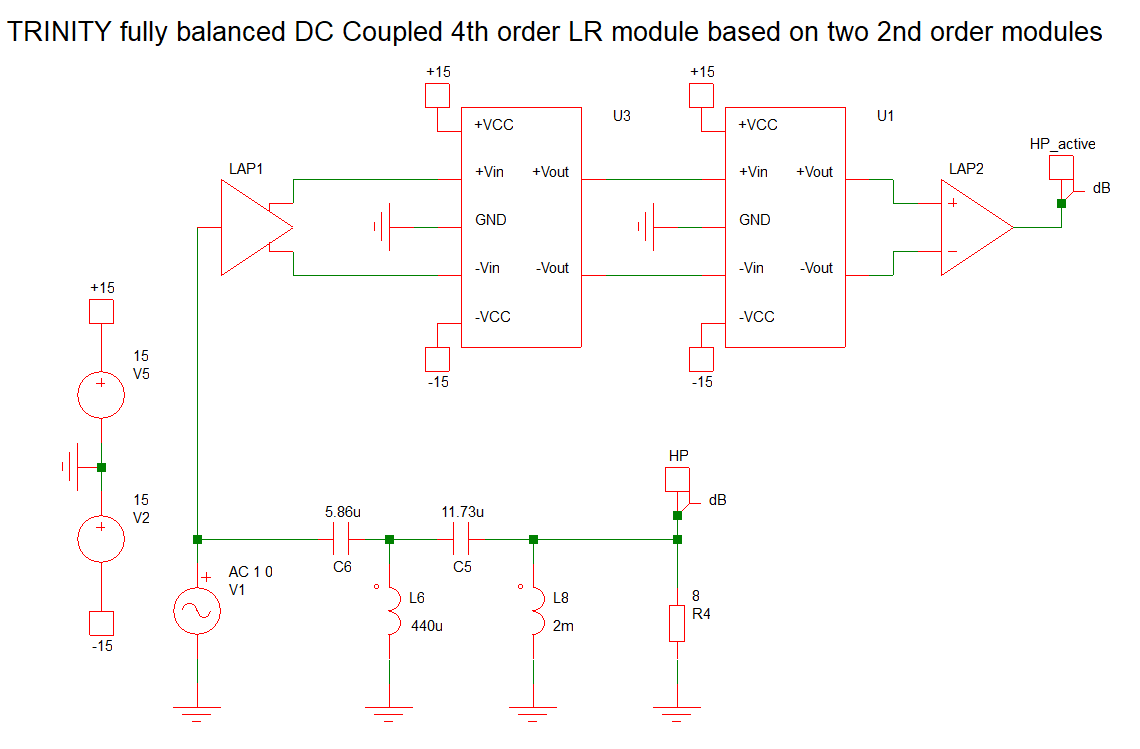 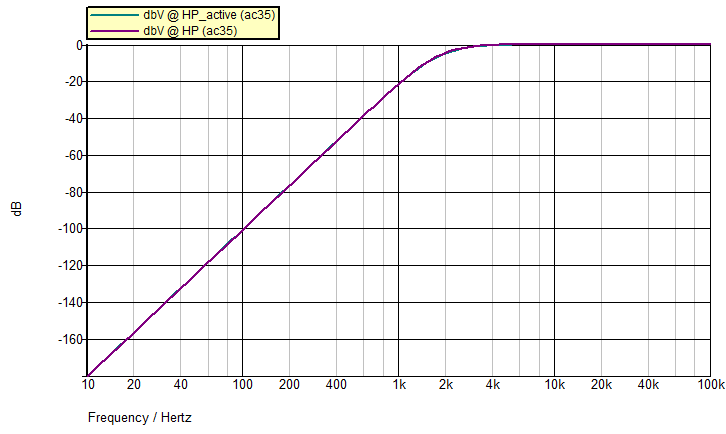 Such a device would be the epitome of any active loudspeaker designs.

The Problems with the Intermodulation Distortions
6. Februar 2019

Some Basics about Music and listening skills
9. November 2018